Tim Melvin is an investor and financial columnist residing in Windermere, Florida. Along his ongoing journey in this life he has met wandering and seeking souls in search of the Meaning of It All. He has had late night booze soaked discussions about Who We Are and What It All Means. He has tested a few religions and found most of them not only lacking but just plain old fashioned pig-headedly wrong. He has interacted with dogmatic individuals who thought they had The Answer and felt the need to share it. This has often led to Tim searching for the perfect right cross. It has occurred to him that there is no way of actually knowing what or even if there is a meaning to everything. Despite how loudly a particular faith, sector or creed insists they know it all, there is no way of having any fucking clue.

What he is certain of is that in our search for meaning and solace we ignore a lot of really good shit that’s already here. There is love, friendship, wine, sex, literature, music and baseball, all for the enjoying. He has developed a sneaky suspicion that the meaning of it all may be to enjoy all the really good things that we already have while being nice to others. He thinks there is a distinct possibility that the meaning of life is life itself.

He currently lives outside Orlando Florida with the only woman on the planet who could possibly put up with him, and his stepdaughter. Much of his time is spent communing with pelicans and alligators while scheming ways to get his adult children to the Sunshine State. He is actually an Ordained minister and is happy to perform church type services for large fees. 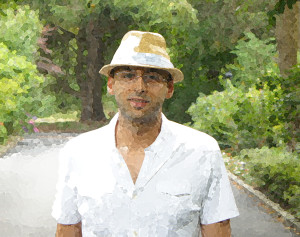 Omid Malekan is a real estate manager, cartoonist and wannabe pundit. He too has often sought the Answer To It All, only to come away with two conclusions: That things are greater than the sum of their parts, and that he is not very good at math. He would be considered the first card carrying member of the Church of No Fucking Clue, except that there are no cards and the Church has no members. He once tried to keep up drinking with Tim in a pony bar outside Lexington, Kentucky and suffered catastrophic results. Him and Tim have been great friends ever since. His other work can be found at www.omidmalekan.com